Need some help identifying this Honeywell board and panels

Hey Guys,
Be gentle I just bought this house and I am digging through the hardware. I've never owned a Honeywell system before and trying to learn...

I need some help with this gear. Can anyone identify this board and keypads for me?
I assume it is a Honeywell something... (firmware 10.23)
I did some googling for "SAVS20P5" and lot of places suggest this is a VisaP20?

It acts as a Visa20P (power plus # * clears the installer code) but want to confirm (installer code I got reset, and a master code)
It does have what looks like cell module as well (haven't cracked the case on it yet)

Looking for more information like what it is, user/programming manuals and what sensors might be usable for this guy once I confirm what it is. Missing glass break sensors specifically and would love to add a couple more motion sensors for better living zone coverage.

Down the line might be interested in hooking up a AlarmDecoder, Envisalink or Total Connect if possible.
(nook has been repaired found the broken wire)

Looks like my board and my keypad is similar to the first pic. Honeywell Vista-20P. I have a few printed pages from the manual I downloaded a while back. Let me see if I can find it.
G

A Google turned up this link

I also see you have resistors in your panel. Usually these are fitted in the switch / sensor in what's called FSL ( fully supervised loop ). While the alarm will work ok the panel may not detect certain faults or tampering. See link 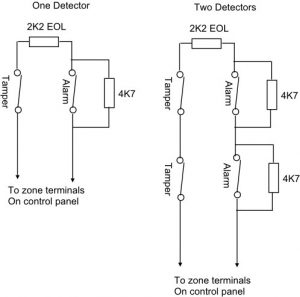 Great! That link also has a manual I didn't know about. Thanks @Griswalduk !
D

Griswalduk said:
A Google turned up this link

I also see you have resistors in your panel. Usually these are fitted in the switch / sensor in what's called FSL ( fully supervised loop ). While the alarm will work ok the panel may not detect certain faults or tampering. See link

Thanks @Griswalduk !
Lot's of info to plow through.

Is that your site? The manuals appear to be behind google docs and need access?
G

datdamnzotz said:
Thanks @Griswalduk !
Lot's of info to plow through.

Is that your site? The manuals appear to be behind google docs and need access?
Click to expand...

Nope it's not my site I was reading the thread and did a quick Google using panel / board numbers SAVS20P5" and VisaP20?.

The other link regarding FSL is not mine either. Again another Google. It explains it along with diagrams better than I ever could lol

If you've a Google account it may give you the option to download. It sounds like @Snapper30 has had some success. Perhaps you 2 could help each other out.

datdamnzotz said:
Hey Guys,
Be gentle I just bought this house and I am digging through the hardware. I've never owned a Honeywell system before and trying to learn...
Click to expand...

I was in your same situation a few years ago. I figured I'd give you a run down of what I did to save you some time.

Whether its a Vista 20P or a Vista 15P doesn't really matter, they both are about the same with 20P being able to have more zones and controllers.
I personally ended up having the Vista 15P...

First thing I did was download the user manuals attached below.
Then I changed the user code and installer code. Directions in the attached programming guide. Most likely the installer left the installer code as default. If not, Im not exactly sure how to reset it off the top of my head or if its even in the manual but I know the answer is out there somewhere and doubt it will be hard to find.

Then I bought a Tuxedo Touch Smart Controller. LINK HERE
You can find them reasonably priced on eBay but make sure its the smart controller because there is another one that looks exactly like this called the 6290 but only has half the features.

The Tuxedo was easy to hook up. Since you have two controllers you would want to put this one buy the front door since I would guess that's the one programmed as the master key pad.
With the Tuxedo you can read what is going on in your panel on the display and you dont have to type in all the crazy codes and it will show you what zones are being triggered ect. (this is how I figured out how my zones were programmed)

Then I bought an AlarmDecoder network appliance for Raspberry Pi LINK HERE
They use to sell just the board that went on the GPIO pins of the Raspberry Pi which is what I bought, but now it looks like they sell the whole system with the Raspberry Pi included. There are other options like the EnvisaLink LINK HERE but I went with the Raspberry Pi running Linux so I could make it do anything I could code up. AlarmDecoder has a built in webserver and I connect to my home network over a VPN run on pfSense so I don't need my alarm system connecting to any remote servers. TBH I can't remember exactly what it was that made me choose AlarmDecoder over EnvisaLink but I know was debating over them both at the time.

With alarm decoder I do self monitoring by sending PushOver notifications to our cell phones. It can send txt messages, emails, ect too. I also set it up to send commands to my Blue Iris server to turn my indoor security cams on on arm and off on disarm. Which I see you already read.

Here are the manuals I have.

@whoami ™ Thanks for the additional info on the controllers. Something else to add to the list.