and a delivery to Telegram:

With Telegram's sendPhoto, I understand cURL is required :

Which delivers a test image to Telegram.

However, all attempts in doing this from the Alert Action fails:

I use a full Windows path in the 'photo=' argument

Code:
~~~~~
BTW, you can use the following 'trick' to see what Blue Iris is sending for the macro values...
Use the following action and edit the 'Parameters' field for the macro(s) in question.
I've assigned this action to a camera preset 'On call' action which I use as a utility. 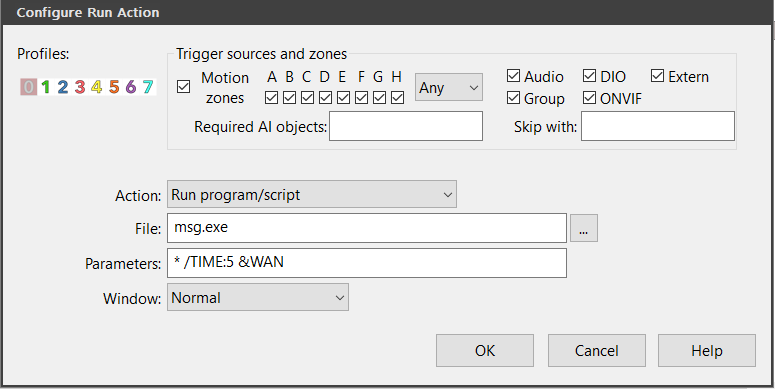 Thanks for replying, yet unfortunately not that much joy as yet. Setting the parameter as :

No errors, yet no image or anything in Telegram.

Changing the parameter as to specify an image :

Adding /TIME:5 to the parameter unfortunately does not keep the window open long enough as to validate any error or the variables being send in any of the scenarios. Unfortunately I'm still stumped...

results in the only window being:

Sorta expected as I can't find an msg.exe on the box

Yet no other window.


So I then created a script file containing only

of which I get only the "Test completed" window and still no image delivered to Telegram.

Reverting back to a message alone:

also results in the "Test completed" window only, yet with no message in Telegram.

Yet, if I run the script from the command line, the message is delivered to Telegram.

Is there a log file which could be referenced ?
J

1. My ‘photo=‘ argument photo=@"D:\Blue Iris\Alerts\&ALERT_PATH" points to the Blue Iris Alerts folder. Does yours?

2. msg.exe may be missing on your system (more). Mine is located here (Windows 10 Pro):
C:\Windows\System32\msg.exe

and is being populated upon alerts

3. cause I had no idea on msg.exe previously. Though it was somehow related to BI.

It's definitely the variables.

yet the files in c:\BlueIris\Telegram_Alerts

How would the &ALERT_PATH match to a file as &ALERT_JPEG is unknown and as seen before, only &CAM is "usefull"

P.S. Deepstack is implemented as to validate an image before sending it.
Last edited: Nov 29, 2021
J

BTW, what you are calling ‘variables’ are called ‘macros’ in the Blue Iris help pdf (e.g., &ALERT_PATH). This may matter when you are searching the help file and this forum.

You would need to confirm with with the developer, but I suspect macro &ALERT_PATH requires the existence of the ‘Alerts’ folder on the ‘Clips and archiving’ page. This folder is not apparent in your screenshot above. Perhaps you’ve renamed or deleted it?

Tip: I’ve assigned this action to a preset on all cameras of interest so I can execute it on demand while debugging scripts, etc.

After days of battling, finally a win !

Did a complete re-install of Windows + BlueIris.

This time round, did not create a new folder for Alert Action Images. Basically, made no changes in Clips & Archiving.

In each cameras' settings, set "When triggered" to "Add to alert list: Hi-res JPEG files" which then populates the c:\BlueIris\Alerts folder.

Under "Immediate actions" set a run Action to "msg the macros' values at time of trigger".

Executing a manual "Trigger" from the camera's context menu:

As such, no JPEG "recording" as previous used.

A heads up… the two links have a finite lifetime… Ken reminded me recently that the DB locators are valid for long as the database is not rebuilt or compressed, which is daily by default.

The success was related to doing a new install on a totally different machine, which never had BlueIris on before.

Reverting back to the original BlueIris machine and having uninstalled BlueIris, then also

followed by a reinstall and once again I am not receiving the Telegram images.

Applying the msg action and I get on a motion event:

The "Clips and archiving" is as default as per a new installation:

and though Alerts reflect within the console:

No files are being created within "C:\BlueIris\Alerts" as expected from the "Clips and archiving", having been the original issue ...

The cameras are recreated from scratch and under the "Record tab", only the "Pre-trigger video buffer" and "Combine or cut video" was amended.

Neither does the option exist to having the JPEGs specified to the Alerts folder. This being the reasoning I originally created the Telegram_Alerts folder.

Is it a case of enabling the JPEGs and storing it to a new folder, changes a value somewhere hidden than cannot be reverted back by a user ?

Problem being, even a re-install on the same machine does not resolve the issue and once you've touched the JPEGs setting ... no AI Alerts for you anymore ...

If I have it correct, what would be the best means to advise the developers ?