Feb. 13 2018, just before the start of Chinese New Year, I ordered one Dahua IPC-EW5431-ASW for about $127 from "Dahua Franchised Store" on aliexpressto be my new driveway overview camera.

The seller reminded me of the holiday and noted the camera would not ship for a few weeks as a result. March 1st I was given a tracking number, but it hadn't actually shipped yet. March 2nd the seller asked me to confirm it was okay that the camera has only Chinese firmware with no English option, and mentioned if I used Dahua's PC client software then I'd have English menus through that. I said that was fine. March 6th was the first tracking activity. It arrived in the USA around the 12th and was at my local post office today on the 20th. This is pretty typical for cheap shipping from China.

This is not an outdoor-rated camera, but I have it under an eave so it shouldn't get too wet.

Conveniently, the seller informed me of the default password of this camera without my having to ask. It was "1234567a". User name "admin". I configured the camera using Pale Moon 32 bit with the addonS3.Translator to translate the Chinese menus to English. There was one little glitch - the Save button for saving changes to the text overlays was hiding behind the video preview box in Pale Moon. I ended up "clicking" the save button with JavaScript, though if I hadn't known how to do that I'm sure I could have gotten around it using some other browser or Dahua's PC client (smart PSS I think). Besides that, it was just like any other Dahua camera with Chinese menus. It even had NTSC firmware as far as I can tell (30 FPS limit, not 25 FPS).

The version information reported by the web interface is:

For the main stream, you can choose between H.264H and H.265, with or without Smart Codec. I keep Smart Codec off for compatibility reasons.

As with other 4MP Dahua cameras, there are 4 main stream resolutions. The first has a marginally larger field of view than the others, though it effectively only adds vertical FOV since in all cases the sides of the frame are beyond the edge of the lens.

This clip was captured with the camera streaming 48000hz AAC audio with the noise filter disabled:

Exposure settings are on auto.


I have a lot of IR flooding this area already, so there is little difference if this camera's IR is on or off. 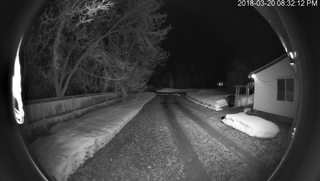 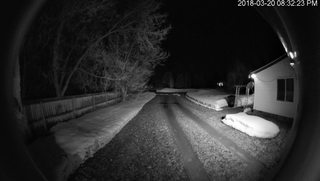 The camera has three IR LEDs in a ring around the outside edge. 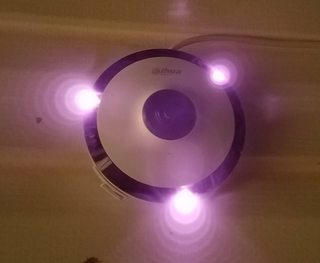 IPC-EW4431-ASW seems to be widely available, many shops have it, of course with "do not update" option for multi-language firmware. IPC-EW5431-ASW is only available in 3 Alixpress-shops but seems to be their current model: 高清（400万）红外鱼眼型网络摄像机-浙江大华技术股份有限公司