Livestream camera in the sandhills of Nebraska

The Nebraska sandhills region covers roughly 23,000 square miles . It is a vast region of sparsely populated counties and not too many roads. It lies atop the Ogallala aquifer, the largest fresh water aquifer in the world. In the low lying areas are hundreds of lakes and rivers. 85% of the region is still in its natural state, never plowed. The University of Nebraska has a few research ranches in the region. The camera described below is set up on a hilltop that has cellular coverage most of the time. About ten years ago I installed three timelapse cameras on the research ranch. At the time the DSLR cameras recorded the images to the SD card in the camera. So a camera visit was required to retrieve the images. About three years ago we decided to try to link the cameras to a hilltop where cellular access was available. So, after quite a bit of walking and riding a ATV, I found a place that had line of site to all the timelapse cameras and also had a cellular signal. The service was good and we were able to maintain about 6mb up and 10mb down.

I made a routine visit to the camera sites and hub site a couple days ago. This will probably be the last visit till late spring. 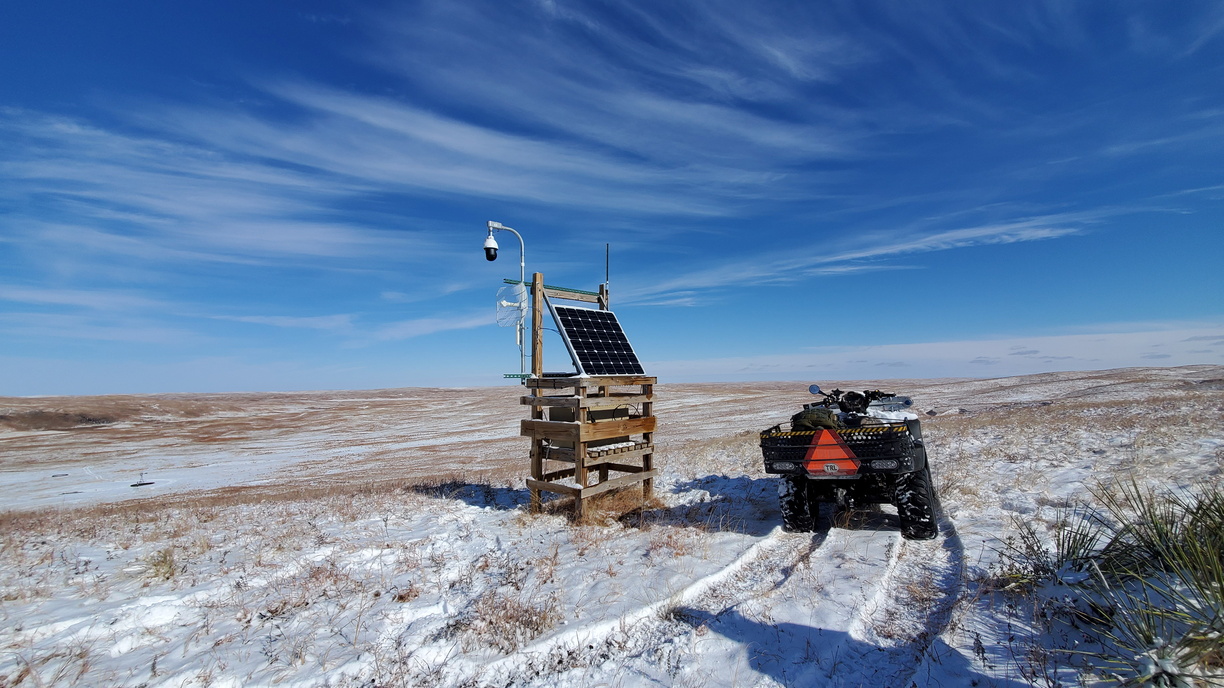 The structure above is made out of treated lumber set in concrete. It is about six miles from where I park the truck. On the structure you can see a 2.4mhz Ubiquiti grid dish pointed to a timelapse camera about four miles away. The other wifi antenna is a Ubiquity 2.4mhz panel pointed at two cameras about one mile away. The three timelapse cameras are each controlled by a Raspberry Pi. Plugged into to the Pi 40 pin GPIO connector is a custom board that has a real time clock with coin cell backup and a GPS module. On the two close cameras the Pi 3B internal wifi works to send the camera images to Box.com whenever the camera is activated. The Python script in the Pi reads the GPS almanac data stream, calculates the sunrise and sunset times then sets the alarm function on the DS3231 real time clock to take the next picture. The camera takes a picture every 30 minutes starting at one hour before sunrise and ending one hour after sunset. Between the pictures, everything is shut down except the real time clock. This saves greatly on battery power. 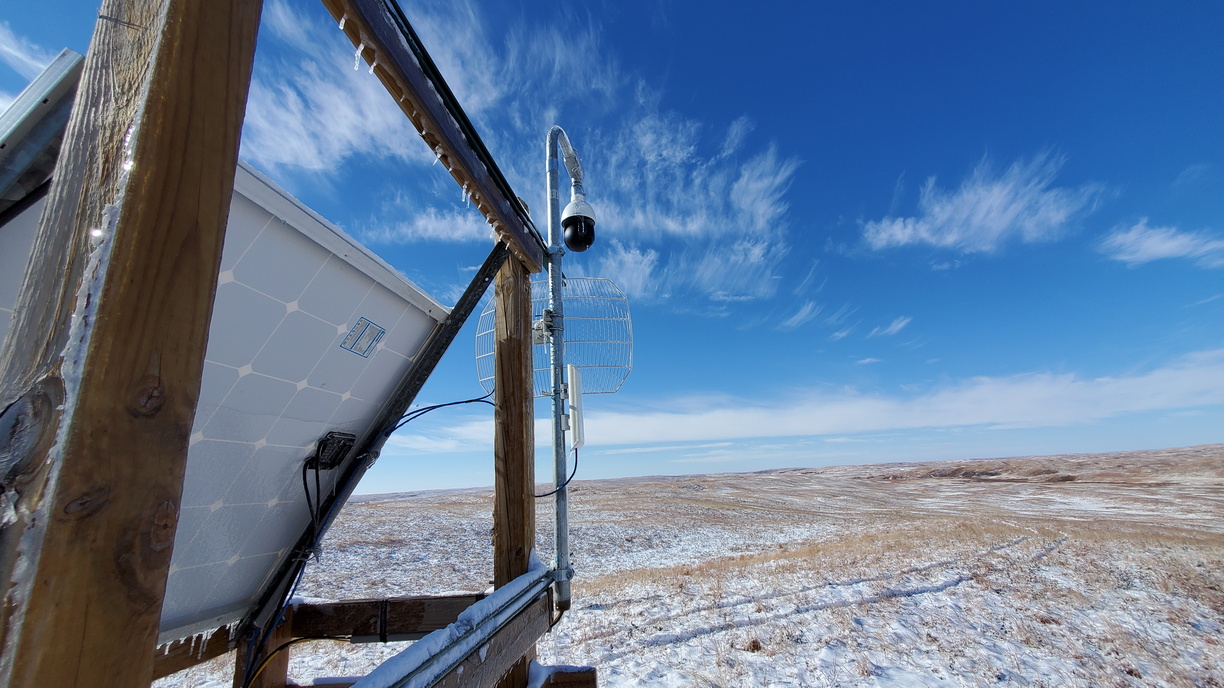 The night before I made the trip the the camera, it rained a little and then snowed a couple inches. 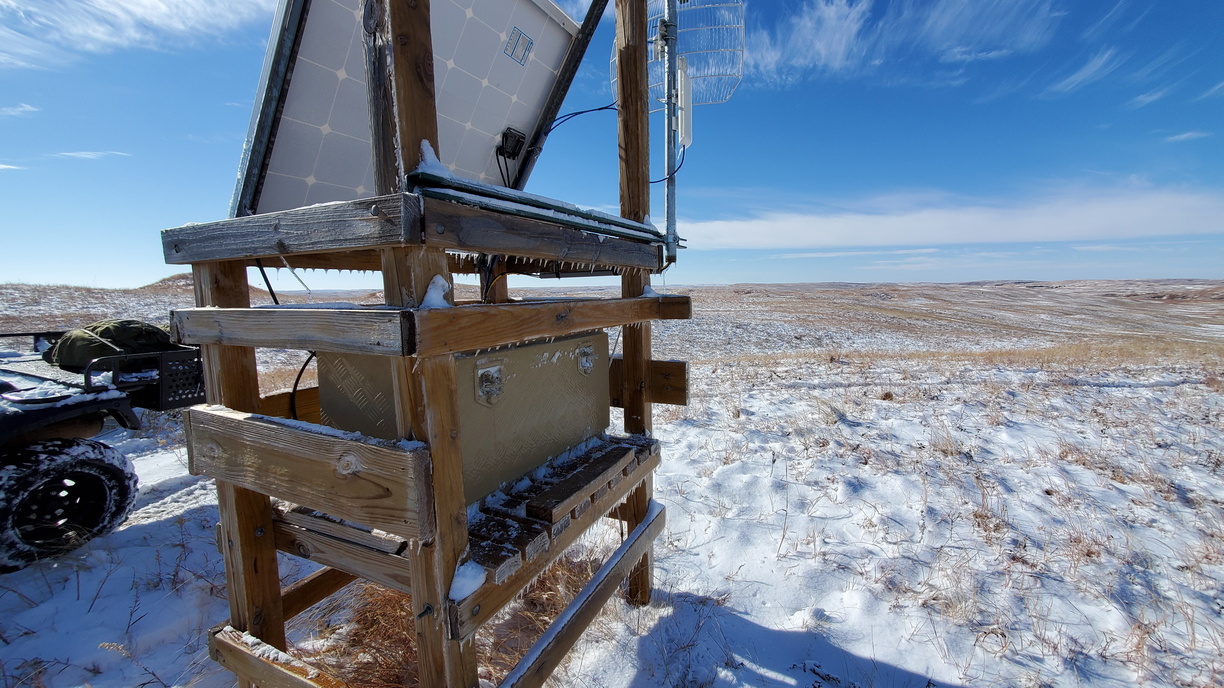 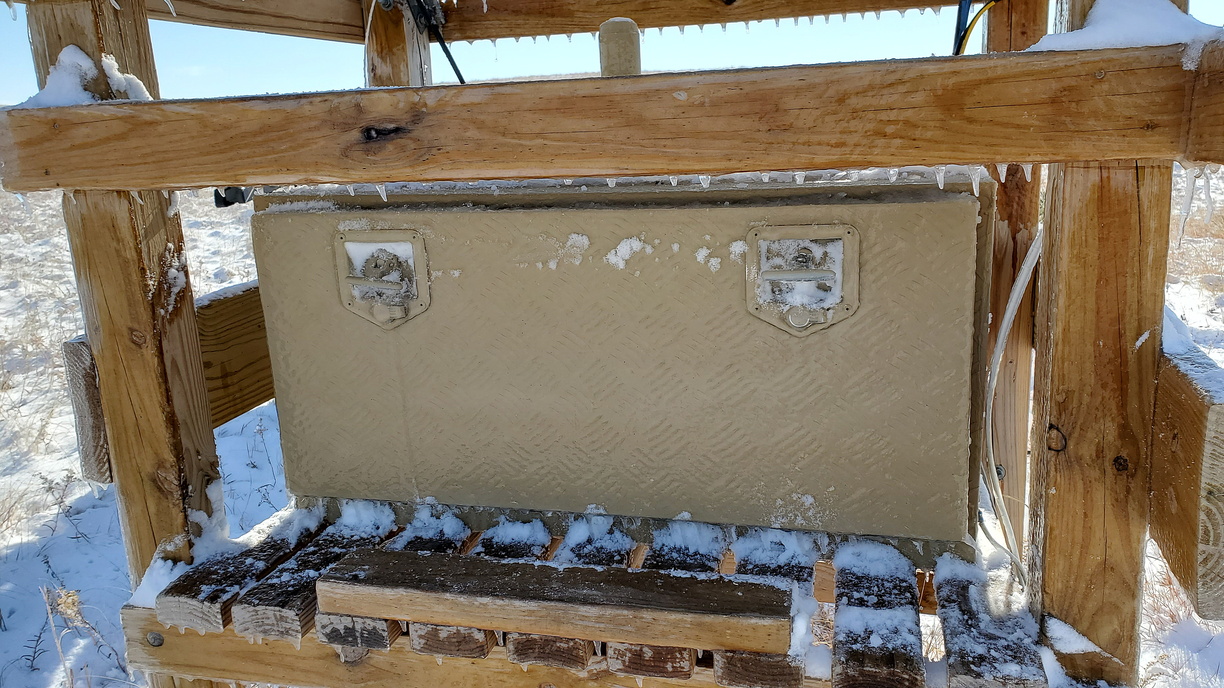 I didn't take a picture of the equipment box contents this trip, but inside is a MPPT charge controller and 100Ah deep cycle battery. Also in the box is the Cradlepoint cellular router/switch and the Raspberry Pi used to convert the RTSP stream from the camera to RTMP for streaming to YouTube Live. Since this camera is so hard to get to most of the year I wrote a script for the Pi to ping a website every fifteen minutes. If the ping is not received, it waits one minute and tries it again. If it is still not received then it powers down the cellular router/ switch to reset the connection. There is also a script that monitors the bandwidth usage.. If the ping is good but the bandwidth usage is bad, then it reboots the Pi. This has saved me many trips. This is a daytime camera, so there is a circuit that uses GPS data run into a TI MSP430 to calculate the sunrise/sunset times to shut down the IP camera and wifi equipment after dark and fire everything up an hour before sunrise. This saves a lot of power since the nights are long and cold in the winter here.

@TRLcam I love all your posts! It seems like every couple of days you have another great installation to show off and they're all unique!

Thank you. Yeah, I have been extremely lucky in my career choices. I have been contracted to replace an old Vivotek camera on a windmill back up in the sandhills. So, in the next couple weeks watch for another installation story.

Great projects you have going there. Would love to see the time lapse edition of your video. Never knew that part of Corn Husker country existed. Keep posting your projects, very informative and interesting.

Very cool. Which Cradlepoint router are you running? Do you have a separate switch attached in the box so you can plug in a laptop for maintenance?

biggen said:
Very cool. Which Cradlepoint router are you running? Do you have a separate switch attached in the box so you can plug in a laptop for maintenance?
Click to expand...

The Cradlepoint is the MBR-95. It has a four port switch built in. Five if you configure the WAN port as a LAN port. That is usually enough to have one port available for the laptop. If not, I can log in using the wifi.
Last edited: Nov 11, 2020
M

Pretty much anywhere around here that whole rig would disappear in about 3 days. ; )

handinpalm said:
Great projects you have going there. Would love to see the time lapse edition of your video. Never knew that part of Corn Husker country existed. Keep posting your projects, very informative and interesting.
Click to expand...

Here is one of the timelapse cameras. The camera is a Nikon D300. The controller is on the left and is a Raspberry Pi with a custom board plugged into the 40 pin GPIO connector. On the board is a GPS module, real time clock, a TI MSP430 that controls the sequence of events, several status LEDs, a switching power supply for 8vdc camera power and another for 5vdc Pi power. Power is provided by one 30 watt solar panel and stored in four Panasonic 18650 lithium ion batteries mounted on a custom PC board. 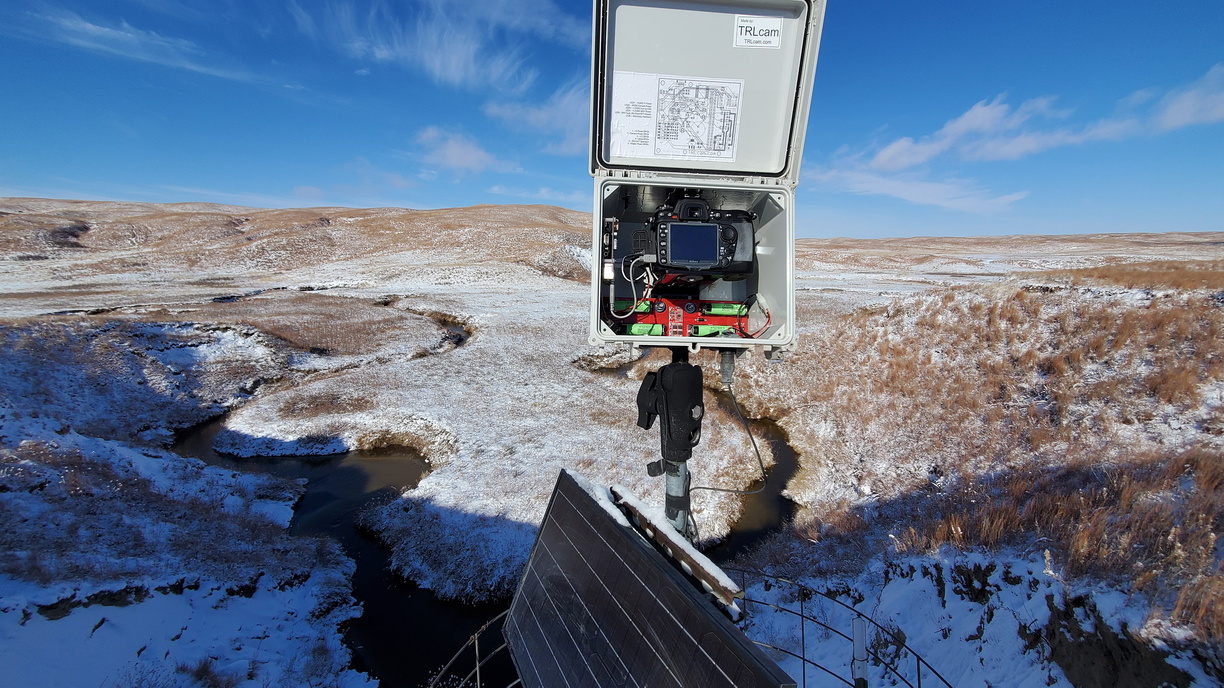 All of these timelapse cameras and remote IP cameras are for plattebasintimelapse.com. They have DSLR timelapse cameras installed throughout the Platte River basin in Nebraska, Colorado and Wyoming. On their web site you can see many timelapse videos from the remote cameras. And many stories about water conservation. It's a very interesting website put together by the dedicated student interns that support the project.

Pretty much anywhere around here that whole rig would disappear in about 3 days. ; )
Click to expand...

In the ten years this project has been running, there has been one camera system stolen, two vandalized and six lost in floods. Very lucky so far.

If you don't mind answering one more question, how are you powering the Unifi equipment and the camera? The Dahua is standard 802.3af (48v) while the UBNT stuff is passive 24v.

biggen said:
If you don't mind answering one more question, how are you powering the Unifi equipment and the camera? The Dahua is standard 802.3af (48v) while the UBNT stuff is passive 24v.
Click to expand...

Good question. On this installation I power the IP camera using the 12vdc input connector and the Ubiquiti airGRID M and NanoStation M wifi equipment with 12vdc. With the Ubiquiti, if you took a 300' run of cat 5 and put a couple Ubiquiti access points on the end and measured the voltage at the far end, it would be quite a bit below 24volts. So, in this application where the total length of cat 5 is about 10', 12vdc is plenty to make it work very well. I would guess that the circuitry in the access point mostly runs on 3.3vdc or maybe 5vdc anyway. The router/switch is also 12vdc.

I didn't know some of the UBNT gear would function on 12V. That is a nice tidbit to know going forward. I had also completely forgot a lot of the cameras had a separate 12V dongle. I'm so used to running PoE I forgot all about it.

Anyway, nice setup. You have given me some idea about a project going forward. Thanks!
C