Does anyone have experience with Robotic vacuums with pet friendly PIR sensors?

My house is vacuumed daily by the robotic vacuum and I wonder qhether this will trigger false alarms....

Location
Land down down under

Considering that PIR sensors detect heat that is moving I would presume so, but because you have pet friendly sensors this limits the size of the moving object.
I'd say that the pet friendly sensors won't trigger but there is no problem in testing.
(If you can) Set your alarm to chime when the sensor detects motion and let the vacuum move around.

You need to do testing with the vacuum hot. Vacuum's output lots of heat and pet PIR's are designed to ignore objects of a certain size based on their heat output. The issue is the vacuum having the heat signature of a much larger object. Only real way to find out if your PIR's will be affected, would be to let the vacuum run and get hot. Near the end of the cycle, set your alarm and go stand under the PIR in the room (so it can't see you), then wait perfectly still and watch. Usually PIR's re-arm after 1-2 mins following a detection, so you should be able to leave the room, set the alarm, and return and position yourself under the PIR without triggering the alarm. From then on in, it's watching and waiting.

If the vacuum does trigger the alarm, then one option would be to re-position the PIR's in the rooms the vacuum goes in to detect above the height of the floor. Technically this opens your house up to burglars crawling around under the pir and undetected. That said, unless you're the Smithosian Museum, or something else with valuable treasures that attracts very sophisticated and planned thieves, it's unlikely your thieves will be crawling around or even thinking of it.
R

Thanks heaps guys. I am still getting wiring done for the alarm. I have opted for the Pet friendly Bosch Tritech PIR.

So sad how the user has to research these things while the company has done nothing. I asked multiple security contractors and they didn't know either! Some of em were supposed to be experts in the Bosch system. Needless to say, they didn't get the job.

I should have made clear above, it's wireless sensors that take @ 2 mins rest after detection. Wired sensors may be always detecting.

Location
Land down down under

I'm looking at the Bosch Tri tech detector @Rebelx mentioned. From what I can see, it has both microwave sensor and PIR.
The good part is that the PIR sensitivity can be adjusted. But the microwave detector is definitely going to pick it up, I'd assume the sensors processor would use both PIR and microwave to prevent pets triggering it.
I'm still mixed weather this would trigger an alarm, all I can recommend is testing. 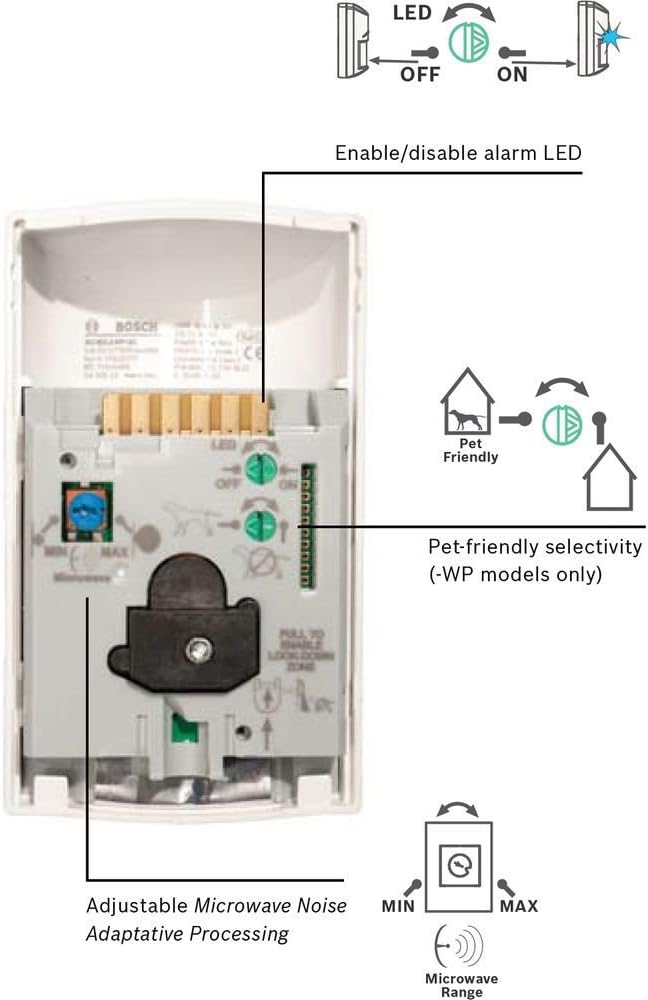 Although this costs an arm and a leg, there exists motion detectors that have a special collar for you pet (attach to the vacuum). I heard this from someone who has tall dogs but I don't know the keywords to search online.
R

Also speak to your security manufacturer. They probably have some experience or have done some testing with this as Robotic vacuums although rare, are not new.
R

I asked Bosch but no reply.
R

When you install the PIR sensor, you must pay more attention on the installation site. Before you install a detector, please make sure the detector is locate in the place that people can walk, and ensure the height of the detectors. Please notice the detection zone and avoid blind area.
R