My goal is to separate the network into vlans for Iot devices, cameras, wifi devices and lan. Currently have a home network setup with 3 A1900 Asus routers configured as a mesh network with a cat5e ethernet backhaul. Switches are a TP Link 16 port gigabit unmanaged switch and a BV Tech 8 port 150W unmanaged switch with uplink port. I've got 2 NICs in the BI machine and cameras are on their own Lan. I setup the router with a VPN server so I can VPN into the network when I'm away from home and view the cameras. There are no ports open on the router (80 and 443) so to speak. Everything is running very well but I'm concerned about the Iot devices. I thought about purchasing a used 24 port Cisco/HP/Dell off ebay which is where I could use a recommendation. Also thought about maybe migrating the network to Ubiquiti products but that would be rather expensive given what I currently have invested. Maybe I'm just over thinking things and should leave well enough alone. Your thoughts? Thanks.
X

If you can google how to configure cisco switches you won't find more capable gear per $$ than a used / ebay Cisco switch like a 3750x PoE. There is no limitation to what you can do. Matter of fact you could even do layer 3 routing with the right IOS code version but I wouldn't recommend it for your situation. Just be prepared to configure it via CLI. If CLI intimidates you then maybe look into Ubiquity. I dont have any first hand experience with ubiquity switching equipment.

I'm a big fan of Ubiquity access points but I'm a Cisco switching fan probably because we're a Cisco shop at work and its what I'm used to / it works well.

I'm a big fan of separating things such that devices only "see" what I choose rather than having one big flat network for everything. If you don't mind the bit of extra work that goes into setting up a more restrictive environment, I'd say it's a worthwhile endeavor that doesn't have to break the bank.

It's hard to argue against Cisco when it comes to capable network gear, and you'll learn a useful skill getting it configured for your needs. The CLI isn't hard to pick up; it just takes a little patience if you've never been exposed to it before. If you have any interest in learning the Cisco CLI (or if you aren't sure if a CLI is for you), I'd highly recommend checking out Packet Tracer - You can mock up a rough approximation of your configuration and play around with the command line without spending a cent.

I've had good experiences with some HP ProCurve switches as well; The older ProCurve CLI isn't that hard to follow once you understand the differences in terminology, and overall is similar to what you'll find with Cisco. HP keeps rolling out free firmware updates and fixes for some switches that have been EoL for years which can be handy. Do note that Cisco is ...less nice... when it comes to their software in the used market. It's not a show-stopper, but make sure you know what you're getting up front if buying on eBay, etc.

I'm also a happy Ubiquiti AP user, but I can't comment on their switches/routers as I've not used them personally.
Last edited: Nov 12, 2019
H

I'm using a HP Procurve 2620 POE+ 24 port switch. You can find them on ebay for around $35 and up. As long as you are comfortable configuring from command line, then these are reasonable for the price. It has 12 POE+ and 12 regular ports with two 1Gb uplinks.
W

For me unless you need L3 then I like Ubiquiti. Use a lot of their kit

I like Ubiquiti also - they are a little more expensive but the management system is good and I've used their support before. Happy customer.

Gents, Thank you all for your responses. I'm an old hardware guy so, I don't mind learning and have tried to keep up with technology. I was looking at the Cisco 3570 24 port switch as I want to separate things and also to keep WAF high. We make a good team as she is good with software and I'm more into hardware/networking but she does like her throughput on the network and would not be happy if performance took a hit. Hence, getting things separated with a managed switch but I want to make sure the main LAN is gigabit. The Ubiquiti Unifi equipment is very intriguing but I don't know if I want to make that kind of investment right now. I have researched the Unifi "stuff" and know I could start off with a couple of items. I do have a couple of questions as to how the Unifi would fit into my current set up but not quite ready to go there as I'm still pondering things. Again, thanks to all for the thoughts.
A

3750x is still old enough to be EoL (cheap on ebay) but its modern enough for what you need. 3750x has 1gb ports, and is capable of 10gb uplink, dual power supplies, and stackable.

Sent from my SM-G965U using Tapatalk

Yes, definitely pay attention to the specifics as a lot of model numbers are very similar. Some auction listings are misleading because they'll list a switch as "gigabit" when only the uplink ports are actually gigabit. Also make sure you're getting an appropriate power supply for your needs if buying a model with modular supplies, along with a (notched) power cord to avoid any unnecessary expenses after the fact.
A

The higher wattage power supplies are the ones with a notch. 1100w and 750w. The connector is a C15 if you're looking it up.

Sent from my SM-G965U using Tapatalk

Thanks for the information on the 3750-x. The naming had me confused and pricing was similar on ebay. I briefly looked at the CLI and can see it would be a bit of a learning curve but I'm not afraid to go there (something about fools rush in - comes to mind, lol). I will be cautious before I purchase anything.
A

If you decide to go that route dont be afraid to reach out for help. I'm sure others would help with config questions. You're more than welcome to shoot me a message. I can review your config or send you a template.

EDIT: make sure you're looking at SKUs that have PoE if you need PoE 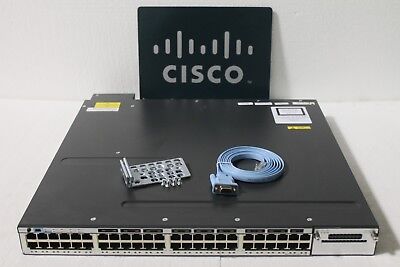 Find many great new & used options and get the best deals for Cisco WS-C3750X-48PF-S 48-Port Gigabit IP Base Switch w/ 1x C3KX-PWR-1100WAC at the best online prices at eBay! Free shipping for many products!
rover.ebay.com

I use Netgear for home and we use a mixture of Netgear/Cisco at work. The Netgear switches are managed via a web gui so no cli knowledge needed.

The only thing I would say about Cisco switches is the need to keep them updated - you wont be able to do this with out an account - unless you know someone who can get the images for you.

@achalmersman - thanks for the example. Don't think I need 48 ports but do want POE. Here is one I considered:

I guess you can sit in one of 2 camps on this - Cisco like all manufacturers regularly release updates to fix bugs, vulnerabilities , performance issues etc. If you are behind a firewall and that is kept on spot then you are probably okay. The other camp is that its a business class device and so most businesses will have policies and processes requiring frequent updates in line with some best practise.
C

Covert One said:
but I'm concerned about the Iot devices.
Click to expand...

If your only concern is the Iot devices just put them on guest wifi network.
A

That should work for you as long as you're sure you wont outgrow 24 ports. Would suck to need more ports in 2-3 years when $20 could have doubled your port count.

As far as updating goes....yes we typically try to keep production switches up to date. Cisco switches dont NEED updated any more than Netgear. Difference is Cisco releases security, bug fixes, and enhancements 1000 to 1 compared to vendors like Netgear. That's one of the reasons that switch cost like $4-$6000 when it was new....

If you stick it in your home and never update it you'd never know the difference. Your going to be using it at 1% of its ability. I've seen switch uptime over 7 years in certain circumstances where maybe it wasn't kept up to date like it should have been. Just because you don't update it doesn't mean it will stop working. There isn't much concern with security if you're just using it as a pretty dumbed down layer 2 switch at home. At least no more so than any other layer 2 switch or "dumb" switch.

All that being said the netgear switches do offer a GUI that appears easy to use (I only ever used as dumb switch). I just stopped buying them when I realized I could get 48 port gigabit PoE+ Cisco switches on ebay for 1/3 the price of a new 24 port gigabit PoE+ Netgear switch. If I really wanted GUI I would look at Ubiquity switches before I went back to Netgear. They look intriguing and would be neat to see how the APs and everything play together.

I will give props to Netgear for their pro safe line of switches lifetime warranty. I've had 2 replaced. No questions asked. Pretty simple exchange process.