The camera connected to Jack 2 is actually dropping packets, and lots of them. I measured 15-25% packet loss (yikes!) with a ping test. The loss is happening at the same time as latency spikes from the camera on Jack 1. 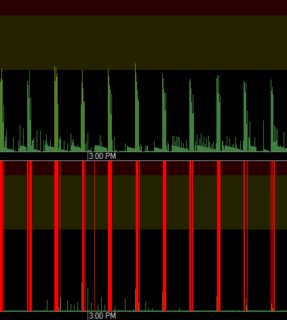 I was able to reduce the packet loss to 5% by reducing the bit rate of the Jack 1 camera, or eliminate the loss completely by unplugging the Jack 1 camera. Neither of these is a good solution, though. I'm just going to have to run another cable over here.

----------------------
I recently decided to install a thermal camera next to one of my other cameras, where I only had one cable run and it would be unreasonably difficult to run a new cable at this time (due to lots of snow outside, new hole to drill, etc). Fortunately, there is a little trick you can use to feed two cameras with only one cable! 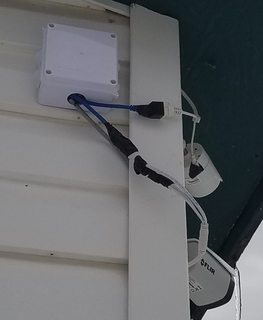 One goes in, two come out.

You see, a network cable contains 4 pairs (8 wires total), but only two of these pairs (4 wires) are necessary for a 100 Mbps ethernet connection with PoE Mode A. Half the wires can be used for one device, and the other half of the wires for a second device. The cheapest way to accomplish this is to crimp two RJ45 connectors at each end of a network cable. Alternatively, it is easier but more costly to use standard network cables with adapters at both ends.

These are the items I used:

Also, four very short network cables are needed to go between the splitter kits and the PoE switch / cameras. This method costs more, but doesn't require any fancy crimping so it saves time.

I probably should have used a larger junction box. I had to bend the network cables pretty sharply to get things to fit in there, and I couldn't put all of the connections inside the box. But it works, and coax-seal wrapped in black tape on the exterior connections makes them nice and water resistant.
Last edited: Mar 31, 2017

Very nice solution. I'm trying to figure out exactly how this works. Can you please tell me how many of couplers, splitters you need?

I have a long cat6 wire that I run to a drop and I would like to add another camera there.

1 splitter set, 2 couplers, 4 extra (short) network cables. Kind of a mess and not too cheap once finished, but in my opinion it beats drilling a new hole through the closet floor with a dull bit and fishing a network cable through the crawlspace and out into the great snowy outdoors. 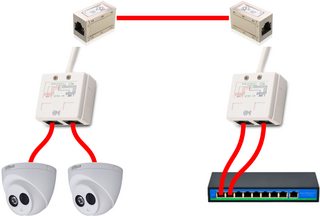 I noticed the splitter says not recommended for POE
I think you just need to be careful, make sure your cameras combined power is below 13 watts or so.

And thanks for this, great idea I might use someday.

I wouldn't worry about it. Granted it is daytime so IR is off, but I have a Hikvision DS-2CD2032-I and a FLIR T4325BN hooked up to it and you can't even see the coupler in this thermal image. 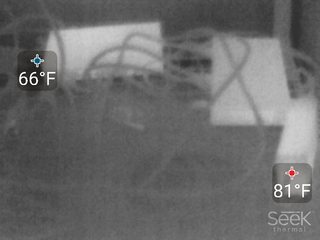 Here, let me warm it up for a second with my hand. 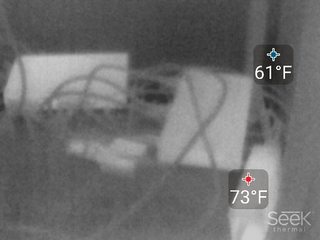 Never mind the temperature readings. Seek thermal's temperature accuracy is terrible. At least with this 1st gen phone attachment. Suffice it to say, the splitter isn't any warmer than room temperature.
R

My concern was more for the POE switch, and per port power. Per spec, each port can support 15.4 watts, but with cable loss they spec 13 w delivered to the power consumer. So both cameras should use hopefully less than 13w.
My switch said my cameras use 5W or less, but I don't remember is that was at night with IR on.

If your switch is POE+, you have double the power and very little to worry about.

You still use two PoE ports (see diagram above), so any PoE switch is fine. With this setup you essentially have two network cables in one cable jacket. Entirely different wires are used for each camera.
T

Between a long spec sheet and 500+ page manual, there's no info if my Cisco switch uses mode A or mode B. After some reading, it sounds like switches mostly use mode A and injectors use mode B. I guess the way to know for sure is to build up a 4-wire patch cord and see if the camera still works. Or alternatively take a surplus patch cord and cut the 4 wires that aren't used in mode A.

Some devices come with network cables that only have 4 wires to begin with. I have a couple such cables lying around.

bp2008 said:
Some devices come with network cables that only have 4 wires to begin with. I have a couple such cables lying around.
Click to expand...

BP arn't those just stranded patch cables though? Typically the 2 pair cables are normally pre-made mass market patch cables that get tossed in with devices as the "included" cable. (not debating, just curious)

zero-degrees said:
BP arn't those just stranded patch cables though? Typically the 2 pair cables are normally pre-made mass market patch cables that get tossed in with devices as the "included" cable. (not debating, just curious)
Click to expand...

Yes, those are what I'm referring to. My point was, tigerwillow1 might already have a 2-pair cable that came bundled with such a device, and therefore wouldn't need to construct a new 2-pair cable to test if his equipment was compatible with PoE mode A.

For what its worth, everything I've come across so far has been mode A compatible (power and data on the same 2 pairs), including a TP-Link PoE injector. It does make sense that some manufacturer could have taken a shortcut and only supported mode B however. It might be against the standard spec to do so. I'm not sure.
T

bp2008 said:
Yes, those are what I'm referring to. My point was, tigerwillow1 might already have a 2-pair cable that came bundled with such a device, and therefore wouldn't need to construct a new 2-pair cable to test if his equipment was compatible with PoE mode A.
.
Click to expand...

This is a great idea and one I never would have thought of, but alas, all of my 8 or so patch cords that were bundled with gadgets have all 8 wires in them. I'll probably build a test patch cord. I'm not even halfway through that bag of 100 RJ45s that I bought.
G 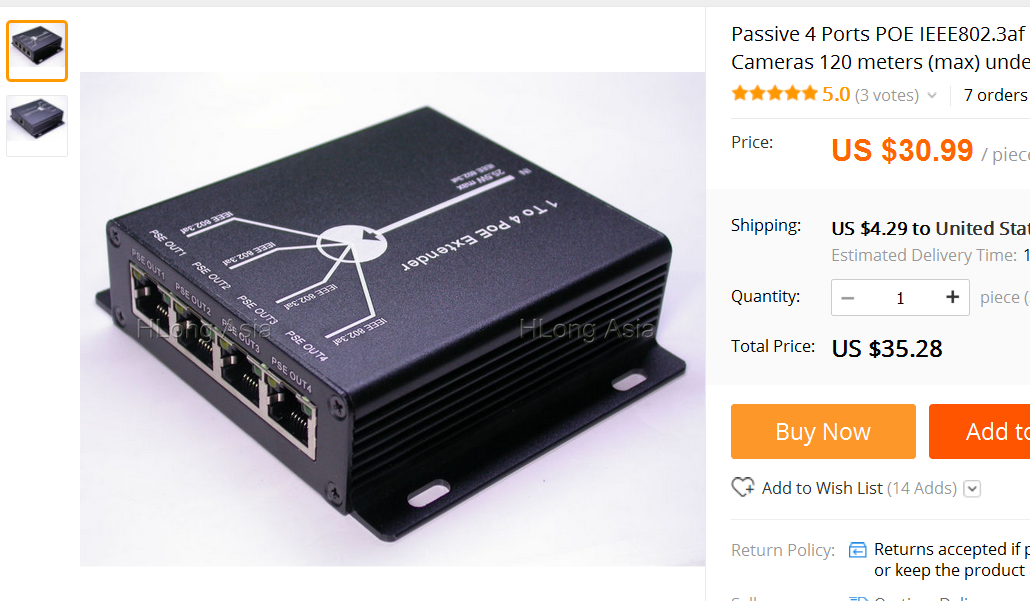 (3) Aliexpress has NO WAY for seller to recover any un-proper negative (3star or lower), we have to LIMITE service to any 3star or lower (negative) voted, unless aliexpress has something improvement on their policy.
Click to expand...

Yeah I don't buy from Ali -- Too much clowning around. I did, however, buy that unit on eBay a while back (came from China) and it actually worked quite well. I only used two of the four outputs, but these cams and devices nowadays use so much less wattage than they used to I feel like.
C

Nice tip about fully utilizing the 8-conductor cable. I'm curious about your FLIR T4325BN camera, which I gather has a resolution of 80 x 45 pixels. Does that give you a useful image?

Yeah I'd say it is a useful image. You won't identify a person or species of animal or make of a vehicle, but it will let you know something is there and that it is more substantial than a shadow. The image flickers light and dark a little bit and that screws up Blue Iris's motion detection to some extent, but I haven't noticed any false motion triggers since I tweaked the detection settings after initial setup. 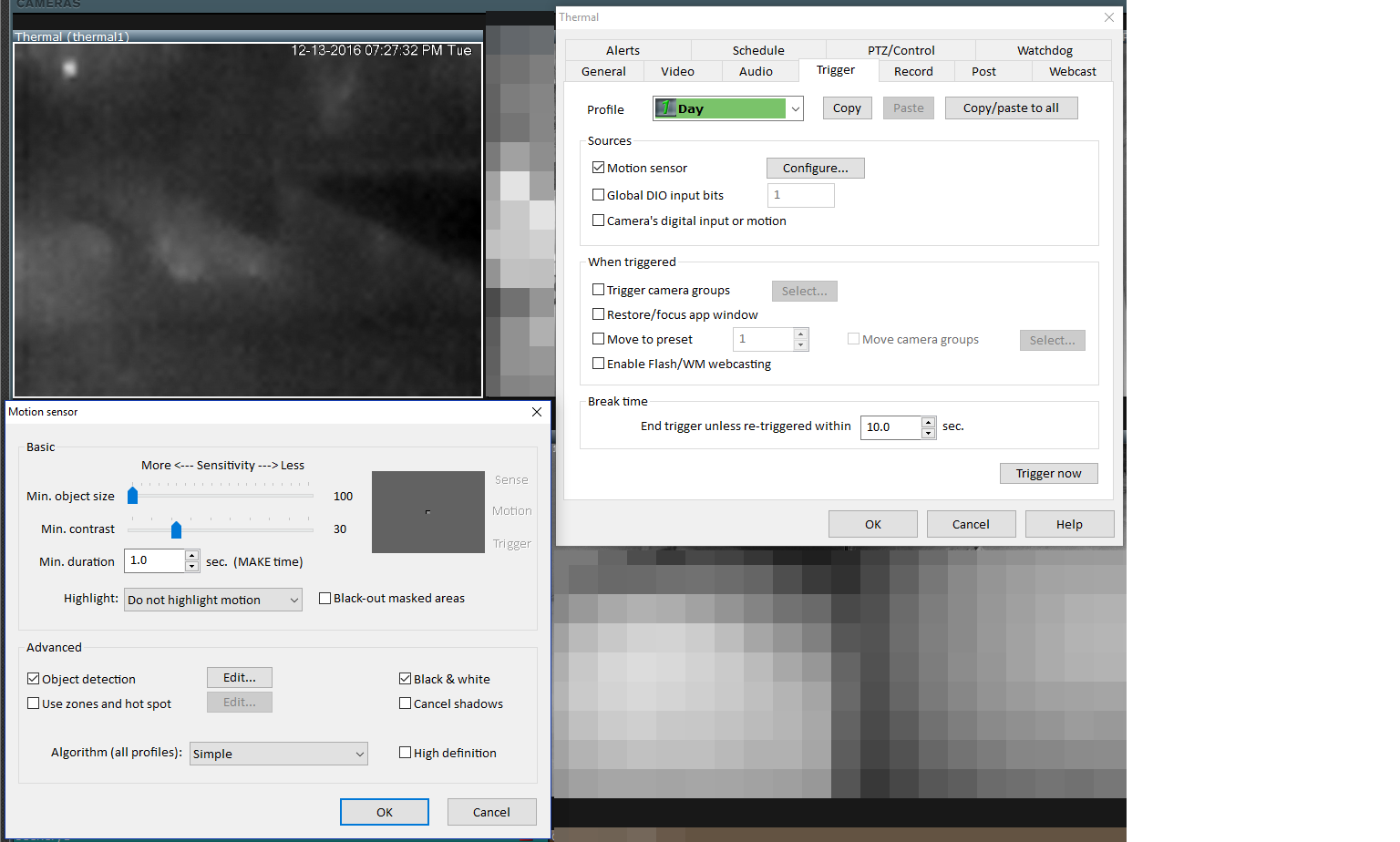 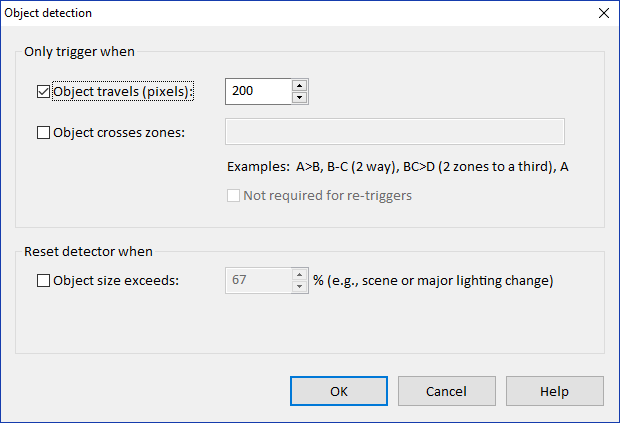 Well it turns out this cable sharing idea wasn't such a good idea. I don't know when it started doing this but I'm now seeing severe packet loss on one of the cameras as long as both of them are active using this passive splitting kit. See the first post above for more information.

Since my location is outdoors with fairly extreme temperature ranges between winter and summer, I'm not going to put an active splitter/switch out there. I'm just going to have to run another network cable. While I'm at it I may figure out which cable run is causing 1% packet loss on all my other cameras so I can replace it too.
G

Depending on how difficult (or costly) that extra Ethernet run is, $30 gets you the 1-to-4 splitter. Works really well. Here are some pictures I took not too long ago showing some stress tests. I mentioned in another thread on here about it that I use them for events. We push POS stations, APs, cams, etc through a little over a dozen spools of cable. I don't want to run several spools for just spot so these have made sense.

I realize you said you didn't want to put an active switch/splitter out there, but I've tested these things to some pretty intense temps. They sit and boil in the hot sun without issue. And like everything I buy, I throw it out in -15-20F temps during the winter because up here near Canada everything needs that extra test ;-)