After three weeks of non-violent civil disobedience outside the Canadian parliament in Ottawa by truckers and other Canadian citizens struggling to uphold their right to not be subjected to forced “vaccination,” Justin Trudeau unleashed the goon squads. Thousands of militarized riot police (and other unidentified heavily-armed operatives) swarmed the area, surrounded the protesters, started breaking into trucks and arresting people, and beating them with batons and the butts of their rifles. 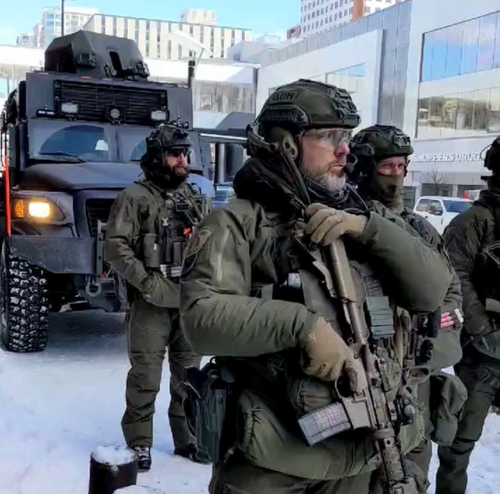 In one particularly ugly episode, the New Normal stormtroopers rode their horses directly into a crowd of non-violent protesters, trampling an elderly lady with a walker. She had just finished saying something to the police along the lines of “you break my heart … this is about peace, and love, and happiness.” Then they knocked her down and rode their horses over her.

Despite an abundance of video evidence clearly depicting exactly what happened, the Ottawa Police tried to spin it this way … 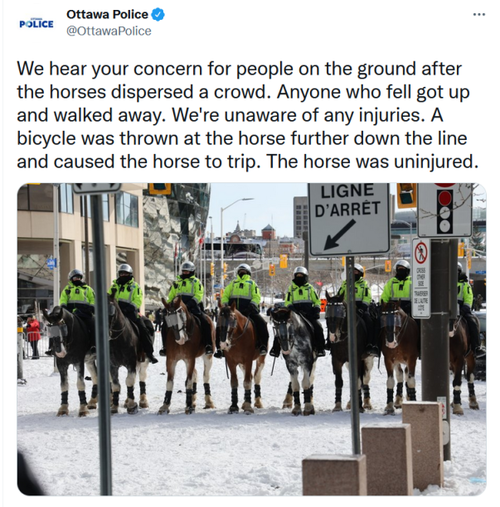 Here’s an overhead photo of the incident … 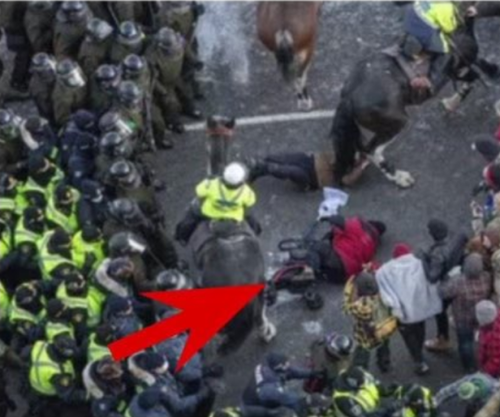 The big red arrow (courtesy of The Marie Oakes) points to the lady’s walker, or the alleged “horse-assaulting bicycle.” Presumably, the face of the gentlemen above her also caused the horse “to trip,” or was in the process of causing the horse “to trip,” at the moment that this photo was taken.
And that wasn’t all. Oh no, far from it. The “show of force” was just getting started. After all, this was not a “mostly peaceful” outbreak of rioting, looting, and arson. This was non-violent civil disobedience, with children’s bouncy castles, makeshift saunas, honking, dancing, illegal barbecuing, and other forms of “terrorist” activity, which had to be crushed with an iron fist.

On Saturday, the goon squads broke out the stun grenades, the pepper spray, and the big wooden sticks. By Sunday morning, they were shooting people with “non-lethal, mid-range impact weapons.” Tow truck operators in horror-movie ski masks were brought in to haul away the big rigs. 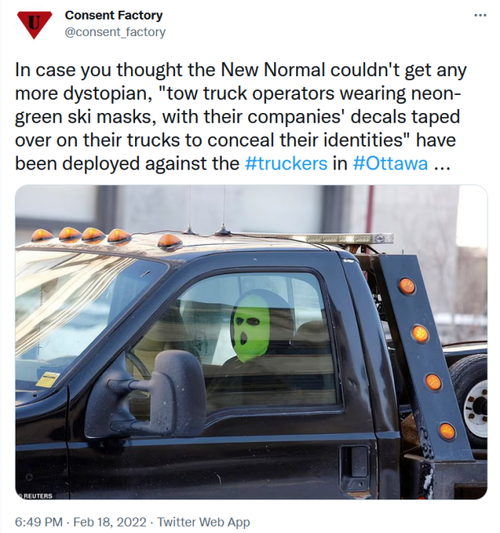 Before he turned the goon squads loose on Friday, Trudeau invoked the Emergencies Act, suspending the Canadian constitution, which he had already suspended back in 2020 due to the “apocalyptic pandemic,” which is why the protesters were protesting in the first place. Parliament was scheduled to debate his authority to declare another “state of emergency,” but, of course, the debate was abruptly suspended due to the massive “police operation” that his invocation of the Act had enabled.
Acting under the Emergencies Act, he immediately cancelled the right of assembly, outlawed the protests, and started threatening to kill people’s dogs and take away their kids. Then he and his fascist New Normal lieutenants started freezing the bank accounts of anyone and everyone even vaguely connected to the trucker protest. According to a Bloomberg report:

“The emergency orders require virtually every participant in the Canadian financial system — banks, investment firms, credit unions, loan companies, securities dealers, fundraising platforms and payment and clearing services — to determine whether they possess or control property of a person who’s attending an illegal protest or providing supplies to demonstrators.”
Click to expand...

And, as if all that wasn’t fascist enough, Ottawa’s police chief has made it clear that, once the “crackdown” is finally over, they will hunt down anyone involved in the protests, arrest them and charge them with “criminal offenses,” subject them to “financial sanctions,” and otherwise destroy their lives and families.

Ottawa Police Chief says even if protesters “retreat and go home”, they’ll be hunted and punished.

Meaning they have ZERO incentive to leave.

Because cowering won’t save them.

The crackdown in Ottawa is hardly an aberration.
As my readers might recall, New Normal Germany outlawed protesting against the New Normal (i.e., the new official ideology) back in September of 2020, and the German police have been absolutely brutal. Anyone deemed a “Covid denier” is subject to surveillance by Germany’s Intelligence services. The US Department of Homeland Security designates us “domestic violent extremists.” Same story in Australia, France, Belgium, The Netherlands, and assorted other countries.
I have been describing the New Normal as a new form of totalitarianism (or fascism, if you prefer) for the past two years, and I have been documenting it from the very beginning (see, e.g., these Twitter threads from March 2020 and April 2020, which the OffGuardian editors have preserved for posterity). It has been there all along, right out in the open, but rendered invisible by the official Covid narrative.

The official narrative is rapidly dissolving, rendering the fascism of the New Normal visible. This is happening now because those of us who have seen it from the beginning — and have been resisting it all along — have held out long enough to run out the clock. GloboCap can’t keep the narrative going, so all they have left is brute fascist force.
We need to make GloboCap deploy that force, and to shine a big, bright spotlight on it, as the truckers and protesters in Ottawa have just done. In case anyone is confused about the tactic, it’s called classic non-violent civil disobedience. I described it in a recent column:

“In other words, we need to make GloboCap (and its minions) go openly totalitarian … because it can’t. If it could, it would have done so already. Global capitalism cannot function that way. Going openly totalitarian will cause it to implode … no, not global capitalism itself, but this totalitarian version of it. In fact, this is starting to happen already. It needs the simulation of ‘reality,’ and ‘democracy,’ and ‘normality,’ to keep the masses docile. So we need to attack that simulation. We need to hammer on it until it cracks, and the monster hiding within in appears. That is the weakness of the system … New Normal totalitarianism will not work if the masses perceive it as totalitarianism, as a political/ideological program, rather than as a response to a deadly pandemic.”

The official narrative is dead, or dying. The Covidian Cult is coming apart. No one but the most fanatical New Normals believes there is any real justification for imposing mandatory “vaccination,” “quarantine camps,” segregation of “the Unvaccinated,” or any of the other “Covid restrictions.” “The virus” is no longer an excuse for mindlessly following ridiculous orders and persecuting those of us who refuse.

Apocalyptic Pandemic Theater is over.
It is a purely political fight from now on.

Ottawa is not the end. It is just the beginning. Protests and other forms of civil disobedience are growing all around the world … yes, even here in New Normal Germany. That does not mean it is time to relax. On the contrary, it is time to step up the pressure. It is time to make the monster show itself, in all its naked fascist ugliness, and to force everyone to pick a side.
There are only two sides … fascism or freedom.
Last edited: Feb 20, 2022

It won't happen, but it's good theater at least... Canadian police on horseback attacking Freedom protesters in Ottawa. Rep. Yvette Herrell (R-NM) announced on Saturday she will introduce legislation to grant asylum to politically persecuted truck drivers in Trudeau’s Canada. Rep. Herrell made the announcement on Twitter after she compared...

Careful with this one...It seems to be an airport where the contractor "Voyageur" parks its planes for UN contracts in Afrika. Their site lists it here: Voyageur Aviation - PILOT CAREER CENTRE

I could be wrong, but... I went through many many many comments there. Except for a certain shill that seems to repudiate everyone else, it sure as heck seems to be where the author says it is.

Ssayer said:
I could be wrong, but... I went through many many many comments there. Except for a certain shill that seems to repudiate everyone else, it sure as heck seems to be where the author says it is.
Click to expand...

Yes, those planes are in North Bay, Ontario. That is not disputed. But they are not new. The company Voyageur Aviation operates those planes out of that airfield and has for many years. That is where they are headquartered.

The dispute is that folks are stating this is new and that maybe the UN has put troops in Canada from these planes.

Canada is now officially a socialist fascist totalitarian state and has been lost.

Parliament just voted to give Dictator Trudeau unlimited power to take citizens money and property at will and to jail those who disagree with him. Free speech and freedom itself formally died in Canada tonight.

"So this is how democracy dies - with thunderous applause."

On Friday, the US Capitol Police (USCP) issued a press release that said they're "closely coordinating" with entities which include the DC National Guard ahead of the expected convoy.

No word on how many protesters USCP plans on shooting.