My issue may be similar to the post thread "Cannot remove Macro Overlay ", but that is old and NOT exactly what I have going on.

I use the BIT Weather overlay and have used different macro #s as suggested in the thread I referenced. But, everything I've tried fails (so far). I create the overlay and add it to a camera (cam name is 'Data'). If I leave it alone the point size is 2, and way to small to read. If I simply (no other changes) return to the overlay settings in Blue Iris and change the text size to a larger number, 20 in my example, when save everything and look at the camera it shows two copies of the weather text. Neither one is the tiny 2 points version, but rather shows two larger versions of different sizes in different positions.

Anyone else who can give me a hint as to the cause and hopeful resolution? THANKS! 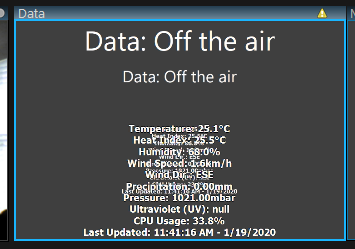 Additional Info: I just discovered the issue resolves if I change the Device Type to "Screen Capture". It returns with any of the other three settings (USB..., Network IP, or Broadcast from...). This is fine for me as this is a "Dummy" cam anyway just for showing the weather data. I guess this makes this a BI issue vs. a BIT issue. But, I would still like to be able to use macros properly on top of real cams.

Agree that is the way it "looks", but I'm 100% sure there are not. That is supported by the fact that a simple switch to "Screen Capture" mode clears the problem. Then if I return to one of the other three modes the ghost returns. This with NO other changes.
You must log in or register to reply here.
Share:
Facebook Twitter Reddit Pinterest Tumblr WhatsApp Email Link
Menu
Log in
Register
Top