I too am in the same boat... But interestingly enough.. I have two machines, both running the same version of Blue Iris Tools. But only one has this problem.

I have a windows 7 machine with BI 4 and BIT 1.6.0. On that machine, everything is working fine, it can talk to the weather station, and it tells me no new updates to BIT since Feb 2020.

Yet, on my new Windows 10 machine running BI 5, with BIT 1.6.0 it has the exact same problems as described above...

So I thought, lets do a wireshark capture of the two and see whats happening.

It appears, though I'm no expert on certificates, that the failure is on establishing the proper Cipher Suites.

It's here I'm not sure I understand. Since I see from the Client Hello message on my working machine, that the Client Hello includes the TLS Cipher suite the Server Hello settles on in it's offer to negotiate. And then works (although it appears because of a previously negotiated session)

And yet, on my Windows 10 machine, Blue Iris Tools Client Hello doesn't offer up that same TLS Cipher Suite. Hence, I believe thats why it fails.... Cipher Suite in question:
TLS_DHE_RSA_WITH_AES_256_GCM_SHA384

and following looking in Group policies under Administrative Templates -> Network -> SSL Configuration Settings -> "SSL Cipher Suite Order" when I look at what is enabled, it appears to be there.

Here are the captures, in case someone who understands this better than I do has some ideas...

First the Working machine (windows 7) :
Here you see the TCP SYN, SYN ACK, ACK of the SYN ACK, then the client hello, followed by and ACK and the a successful server Hello packet.. and everything works fine from that point on....

And here is a copy of the actual Client Hello packet, where it says what TLS Cipher Suites it supports, notice TLS_DHE_RSA_WITH_AES_256_GCM_SHA384 is there: 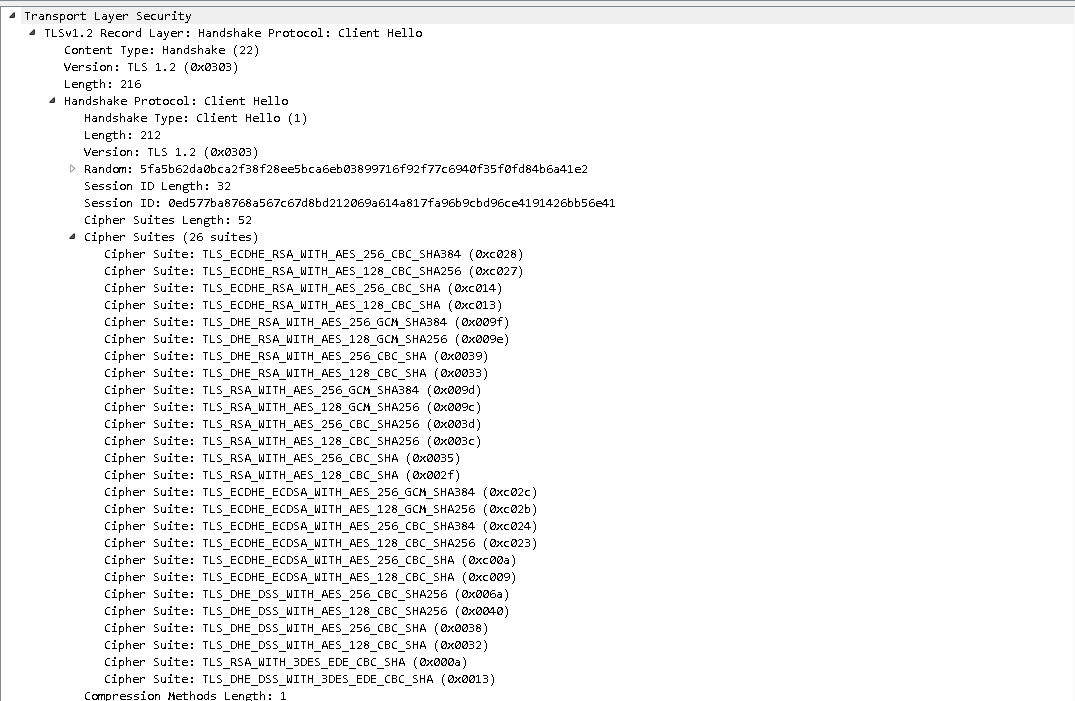 And a quick look at the server Hello indicating successful negotiation... Notice the "This sesion reuses previously negotiated keys (session resumption) ]" message. I think this means, it's only working because I had previously had it working.... But I don't know enough about TLS negotiation to know.

Now lets look at the failed session on the Windows 10 machine with BIT same version as above. Again, we have the inital TCP SYN, followed by SYN ACK, then ACK of the SYN ACK.

Then we send the client Hello message.

Notice that on packet 10 we have a "Level: Fatal, Description: Handshake Failure)" in the TLSv1.2 protocol... I believe it's cause the Hello message didn't offer up
TLS_DHE_RSA_WITH_AES_256_GCM_SHA384 as an option... I And I guess the server doesn't support anything else???

Here is the packet 5, the client Hello message without the TLS_DHE_RSA_WITH_AES_256_GCM_SHA384 option in the list. 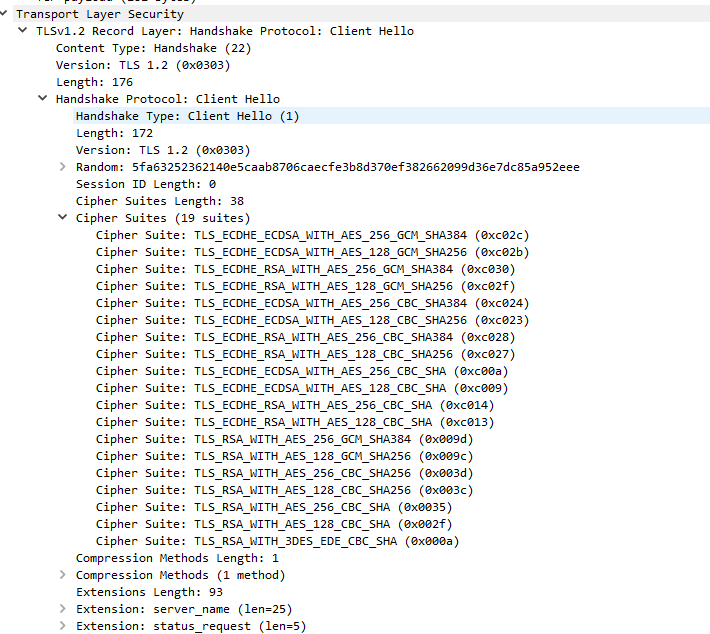 Assuming I'm correct. I'm not sure what one has to do to fix this... Is this a server problem, in that it doesn't support any of the common TLS Cipher suites?

I'm not sure where the issue sits.

Hoping this info helps someone to solve....
B

Cgy-User said:
Hoping this info helps someone to solve....
Click to expand...

Cipher suites can only be negotiated for TLS versions which support them. The highest supported TLS version is always preferred in the TLS handshake.
docs.microsoft.com

"The Microsoft Schannel provider will filter out known weak cipher suites when the application uses the SCH_USE_STRONG_CRYPTO flag ."


More pieces to the puzzle, I'll see what else I can do.. playing with the registry now
J

I apologize if this question has been asked and answered or if this is the wrong place to ask my question. I've looked for help on my question and I haven't found an answer. My situation seems to be that my PWS collects and reports precip per 24 hr period, but BIT / Wunderground only seems to be able to scrape / return precip per hr. I've looked at the MACROS that BIT has available and I see PRECIPITATION and PRECIPITATIONRATE. Looking at the RESULTS scrape which gets returned from BIT, I see that PRECIPITATIONRATE returns a result specifying in/hr. PRECIPITATION returns a result of inches with no time period specified. Can someone clarify the result that BIT returns for PRECIPITATION? Can BIT gather a report of precip per 24 hr period,if I configure it correctly, or does Wunderground not even return that stat? Thanks much.
S

BIT can only report what is posted by WU, nothing more, nothing less.
P

Thanks, sebastiantombs. I can believe that. From what I've seen on the Wunderground page for my PWS, ( Personal Weather Station Dashboard | Weather Underground ) Wunderground seems to display six stats for precipitation. They show PRECIP RATE, PRECIP ACCUM, PRECIP TOTAL and historical results for DAILY, WEEKLY, MONTHLY. I haven't been able to find any details on what they report through their API, which BIT is presumably interrogating. Do you have any clarity on what time period BIT is referencing in its PRECIPITATION stat, which seems to have no historical or time unit attached to the stat? Can BIT's PRECIPITATION RATE stat be changed to attempt to gather precip per day instead of precip per hour?
S

I have no in depth knowledge of what BIT queries from WU. All I can say to add to this is that WU is rapidly becoming a ghost of what it once was and be thankful that it continues to work at all.

Ssayer said:
There he is! I was starting to get worried about you!
Click to expand...

Haha been extremely busy and somehow missed all this. Will see what's going on

At this point, I don't really care if you kick me off of here... but NOBODY should have to wait for 11 months to get the next update to fix what was broken with the multi camera overlays fixed. I'm thinking that you guys are all wasting your time because Mike has moved on to other things and this is not something he is interested any longer in making right. This used to be a great add on to BI and still could be, but for almost a year it has been broken and then several months ago got broken even more and in October he finally says "Will see what's going on" then again, just like January until October, NOTHING. See you guys later. I'll figure out something else to do what I need to do with BI.

Wow! Are you serious? BIT cost you nothing... you know... FREE. Are you really complaining about something that cost you nothing not getting an update that works for you? Entitled much? It's never once stopped doing exactly what I need it to do. Have fun finding something else that does what it does...

Ssayer said:
Wow! Are you serious? BIT cost you nothing... you know... FREE. Are you really complaining about something that cost you nothing not getting an update that works for you? Entitled much? It's never once stopped doing exactly what I need it to do. Have fun finding something else that does what it does...
Click to expand...

It's not that at all. It's taking up my time and making my weather station look aweful now for 11+ months. I'd rather have nothing there than 99 Degrees F for a year... so I'm out. I am a programmer myself and have made a good deal of free stuff myself and I keep up with it in a timely manner when I was still developing. His lack of response at all for months just speaks volumes about how much he cares about it himself. That's all. If I can't figure out a way to do what I want. no big deal, I'll just do without. It's less on my own busy plate to keep circling back to and now for the last 3 months having to have an extra popup in my face every day or ever reboot. Sorry if I offended you. Seem we are all extra sensitive these days... even me!

Tomtreas said:
I'd rather have nothing there than 99 Degrees F for a year... so I'm out. I am a programmer myself and have made a good deal of free stuff myself and I keep up with it in a timely manner when I was still developing.
Click to expand...

Wow. Just Wow!
So instead of complaiing about a pop-up that (at least for me) does not affect the actual functionality of the add on, why don't you create a new free tool and release it to the community here instead?

Perhaps I will.. While you are WOWing, maybe you might want to WOW about the fact that the mulitple station functionality of the program has been broken for over a year. That's it though. I'm turning off the notices on this thread so you all can bash me now all you want. Later.

Does anyone know if it's possible to set up some kind of automation to ensure the metric temperature is displayed? I seem to recall reading somewhere that it may be possible using the BlueIris Tools Addons section.

Tomtreas said:
If I can't figure out a way to do what I want. no big deal, I'll just do without.
Click to expand...

But not without getting your panties in a wad first and letting everyone here know it.
Maybe Mike will refund you for all the money you spent on BIT.
Oh, I forgot...you are ignoring this thread. Since I still use and like BIT despite it's issues at the moment, instead I'll just ignore @Tomtreas .

Curious. I have a APC1500 rack mount with a AP9630 network card in it. It has SNMP on it and is how I get it ti shut down my FreeNAS server safely (which is where BI runs under a windows VM)

I'm wondering if theres a way to overlay the battery status info on a camera. Something simple like wether its on line or battery, battery charge level, battery temprature, etc.

The data available via SNMP

BlakDrgn said:
I'm wondering if theres a way to overlay the battery status info on a camera. Something simple like wether its on line or battery, battery charge level, battery temprature, etc.
Click to expand...

if you could get your UPS data into a .txt file in BIT, assign macro(s) in BI, use "none" instead of WU station ID, I think you should be able to display those overlays using BIT.

FWIW, I changed permissions on the BIT folder "\txt" to allow me to write a .txt file in there named "test.txt", in BI modified the cam's "video", "overlay" so that macro %1 contained "test.txt' and BIT displayed its contents as an overlay.

just FYI... you don’t need to use BIT or its txt folder. Blue Iris macros can assigned to *.txt files in ANY folder, e.g., “file:/C:\Blue Iris\My Overlays\test.txt”

And should you need more macros than the 9 displayed in the UI, try this...

Is there a way to set the watchdog notification for the BI web server to say, 30 or 60 seconds? It sends me an email even when I do an update, so I know it works well, just would like to have it set to wait at least 60 seconds before it "barks" :)